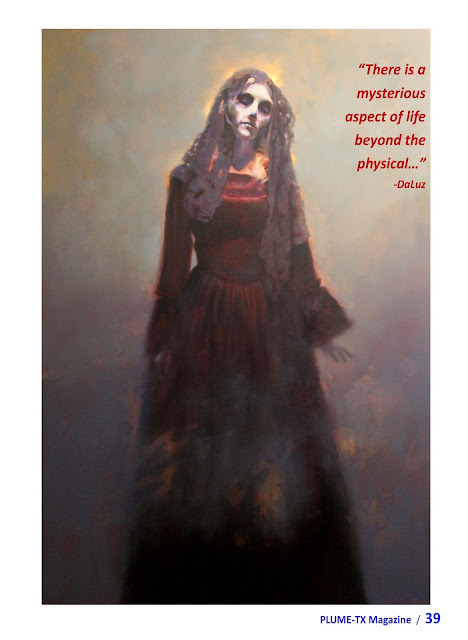 “Mystica”, San Antonio artist, Steven DaLuz’s solo exhibition at Anate Gallery is on view from
December 8, 2016 – January 17, 2017.  Consisting of fifteen encaustic paintings, both large scale and intimately precious, these new works delve into the metaphysical realm of spirituality and transcendental journeys. Radiating auras of chakra-esque light illuminates impressionistic figures that seem to be levitating in atmospheric anomalies. Nebular layers of beeswax, pigment, gold leaf, and varnish congeal and coagulate displaying painterly versions of artistic aureoles and microcosms of unparalleled agglomerations.  Hung between the smaller works are four life-size figurative paintings that gaze upon us like some sort of hallucinatory apparitions, giving promise to the afterlife, and manifesting ethereal qualities of unexplainable repose for otherworldly dimensions.

“There is an idea of a loss and a connection with those loved ones that have passed on”, he says when discussing the new series. “There is a mysterious aspect of life beyond the physical…”
What is unique in “Mystica” is the juxtaposition of scale in the new work. DaLuz, known more for his life-size angelic beings and seductively spiritual landscapes explores the limiting aspects of his painterly surface, restricting his composition to navigate the parameters of twelve to 18 inches, instead of four to six feet.

“I think the smaller works have a broader appeal”, says DaLuz. “Sometimes collectors get outpriced or outsized… these [the smaller paintings in the exhibition] are more approachable.”  “They [the paintings] call you to come closer”, he explains.  “The collectors can relate to them”, says Gallery Director, Ana Montoya.  And, DaLuz is right, the gallery patronage responded favorably to the exhibition, with a near sell-out on opening night.

This notion of spirituality and transcendence has interested DaLuz for many years, but took a turn last year. “It has become amplified in my own life”, he says.  With his recent heart attack, DaLuz came face- to-face with his own mortality.  “The temporary things began to matter less to me.”
“What I am attempting is to provide a vision of space between the other world and here”, he explains while gesturing to “Crossover”,  the life-size image of a shadowy Dia de los Muertos maiden poised in a crimson dress and adorned with a veil.  “She is manifesting herself to the ofrendas and the marigolds at the alter”, he explains. 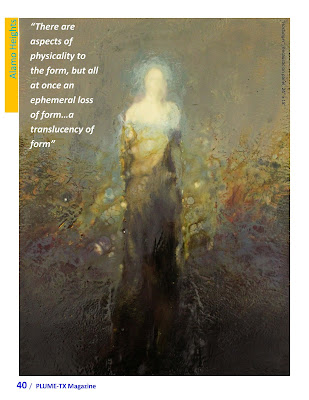 When discussing his more impressionistic qualities vs. the minute detail of his previous portraits, DaLuz understands the complexity of imagery and non-imagery. “The full aspects of inner beings are difficult to show.  I have to restrain myself from putting in too much detail and exercise discipline by saying more with what is left unsaid. The audience can connect to the work, it doesn’t need detail. It has challenged me to convey emotions on such a small scale.”

“Portal”, a 12” x 12” square encaustic painting, hung close to the gallery door is a prime example of DaLuz’s visual cues of transition.  In this painting, there is a central figure of a woman, ascending or descending a grey staircase.  Atop of the steps appears a door, full of effulgent light. It beacons the audience and the figure alike. There is an argent quality to the glow; inviting yet mysterious.
“Doors and doorways are tremendous metaphysical element…they are a portal to another plane, but can also be physical, like a promotion; say in a career…the portal doesn’t need to mean like the afterlife, but can mean the next chapter in life…the unanxious, the mundane”, DaLuz conveys.
“Harbinger”, a 24” x 18” is an encaustic painting that captures all the textural elements of DaLuz’s new painting series.  A centralized figure is seen levitating in a lambent light; energy projected outward from within.  It gazes out at us from the depths of some ghostly abyss.  “There are aspects of physicality to the form, but all at once an ephemeral loss of form…a translucency of form”, says DaLuz. “There is an opalescence of color; the encaustic allows the pigment to become jewels.”
When asked about the similarities between some of the work, Daluz talked about smaller studies for larger depictions and continuations of thought and understanding. “Chrysalis” was painted after “Harbinger”.  I carried on further with the nature of humanity to the inner being. We are a spirit full of energy and life. We are part of the substance of the tapestry of the universe."

Other paintings in the exhibition portray the sense of out-of-body experiences, a transcendental exiting of the soul from the physical vessel. Some forms act as guides or reflections of ancient times when man straddled the spirit realm with his own meager existence.  Still others project apparitions that want us to see them, glowing in the foggy haze of mist with warning or understanding.
However, Daluz’s paintings do evoke a strong sense of personal emotion.   With that said, I believe the showcase- spotlight painting of the “Mystica” exhibition is “Reunion”.  “Reunion” captures the parent/ child relationship in the afterlife; a reunion of souls, the guardian and the dependent.
“There is a nebulous quality of what is beyond them…the future”, say DaLuz.

So much meaning can be projected onto an image like “Reunion”. Each viewer can and will seek individualized meaning in the forms. We decipher the painterly implications by using our own baggage, our own losses, our own sympathies, and our tragedies.  But, what the painting conveys above all this…all the multitudes of individualized meanings and selfish wants and needs of our own desires…is HOPE!  The hope that yes ‘they’ are there waiting for us, in some heavenly atmospheric realm where pain is void and love is everlasting. We want to believe and we need to believe.  I sincerely believe that “Reunion” exemplifies the notion that we can cling to ‘hope’ in order to one day reunite with loved ones who continue to care about us and we them; awaiting our arrival to the ethereal plane of divine existence. 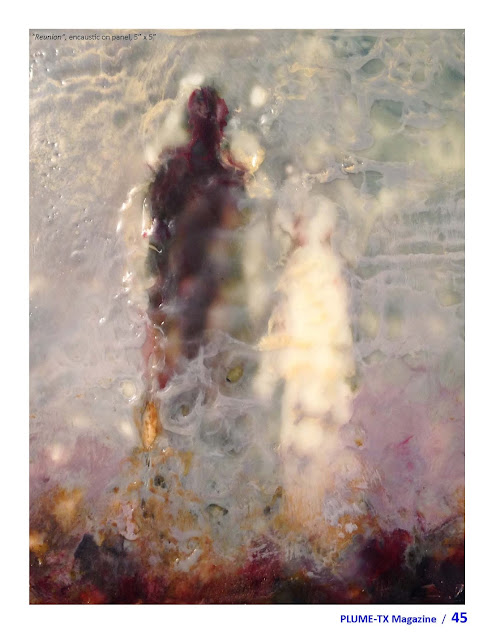 “Mystica” is a powerful exhibition built from smaller paintings that act as building blocks; elements and structures that combine to give support to the age old questions of “What is out there?, Where are we from? , Where are we going? Steven DaLuz shows us answers.  These answers bring more questions, but for now, we can meditate on the universe and understand our role in the cycle of life and death, and begin to apprehend the mystical aspects of the other worlds and planes…space and time…living and the dead…hauntings, spirits, and reminders of our own mortality. 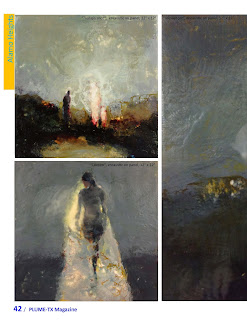 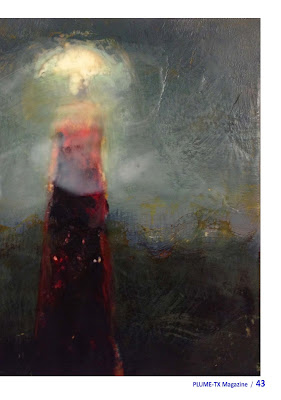 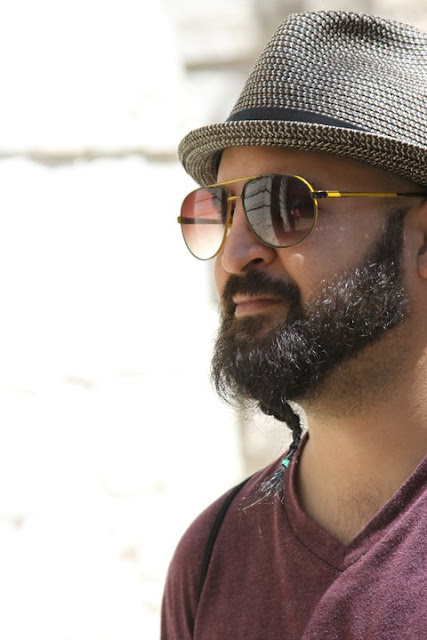 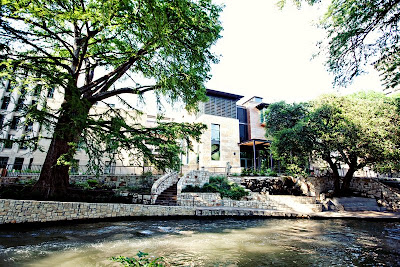 The Briscoe Museum Night of the Artists exhibition